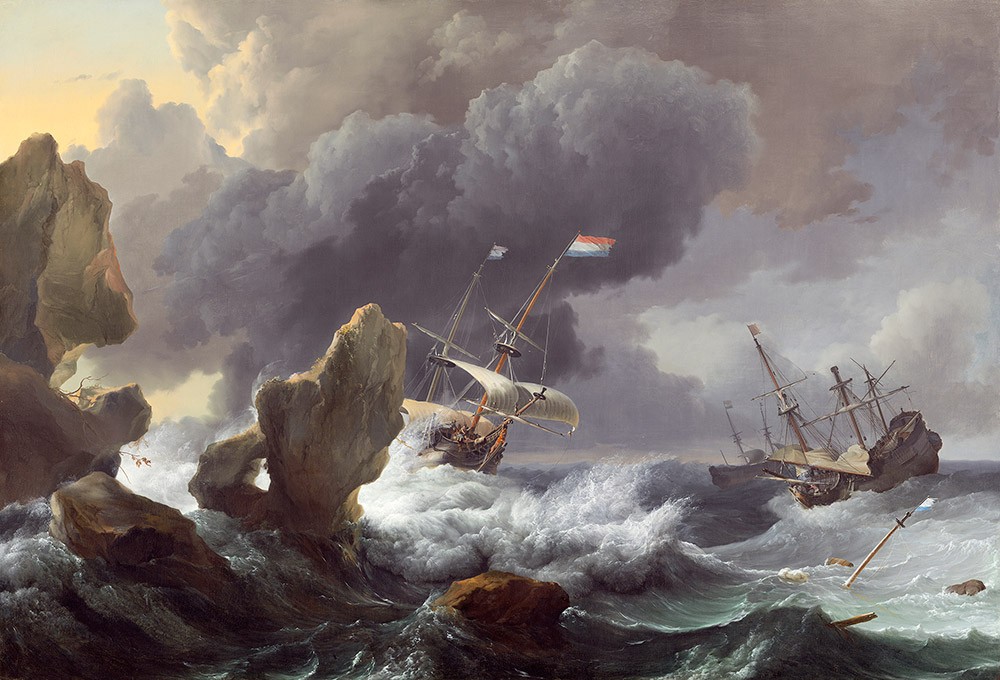 Winston Churchill is remembered as a hero and a leader, not because of his time before the war (he was sidelined and discredited), but rather his time during the war when he displayed exceptional leadership. That’s because true leadership is not needed when everything is under control, but rather when things are at their worst.

As of April 17, nine major publishers laid-off or furloughed an average of 8% of their employees, many in their sales departments (AdExchanger). And we’re only a month and a half into what looks like a multi-quarter recession. Not everyone is born to become Churchill but we all play our parts and all have an opportunity in front of us to demonstrate true leadership!

What can I do Today? Weather The Storm.

In the teeth of the storm, a ship’s survival depends on two things: sea room and steering-way. Sea captain Max Hardberger.

Similarly, what can publishers do to weather the storm?

Sea-Room: How Far are you from the Irreparable?

For a publisher, 3 key considerations apply:

Just like ‘steering-way’ is the ability to propel and steer your ship out of danger, it is critical for publishers sales teams to operate optimally during these difficult times – this means working smarter, not harder! For programmatic and media sales team, the question remains: When budgets are shrinking (almost) everywhere, which brands should I talk to?

Using the Adomik platform, this is what we found: during the crisis, budgets started shifting on a weekly basis, including for top brands. March saw a decline in demand overall. But here’s the bright side. During March, 32% of large and mid-sized brands (i.e. representing the top 75% of spend, excluding long tail brands) initiated or grew their programmatic ad spend via directly sold and negotiated deals. These brands were primarily mid-sized brands with smaller shorter-term budgets than the usual juggernauts, many of which have decreased their spend.

In order to capitalize on where budget increases are and depend less on declining budgets, publisher sales teams need to refocus accordingly. Doing so will require some agility!

With a high throughput pipeline, the key is focus. You can burn a lot of cycles knocking at the wrong doors.

Strategically, I recommend following Gartner’s 3 categories of Dark Sectors (travel, brick & mortar, etc), Shaded Sectors (automotive, tech & telco, utilities, etc) and Spotlights (news, essential CPG, etc). Adomik found the same brand vertical clusters in our analyses of the programmatic market. Having a strategy that weighs in on spotlight and shaded sectors will be key to navigating the next few quarters and through 2021. By allowing to track brands’ spend across programmatic in real-time, that’s where the Adomik platform can be of most help to programmatic media sales teams.

Now is a great time to think about what your business should focus on today for a better tomorrow.

Will you be ready to capitalize on growth on the other side?
What do you need to do today for your business to survive and thrive?

by François de Laigue
“I compiled a few thoughts based on discussions with execs running monetization at ComScore publishers and Adomik’s data on the programmatic industry.”
👉A publisher’s guide for the COVID-19 era. 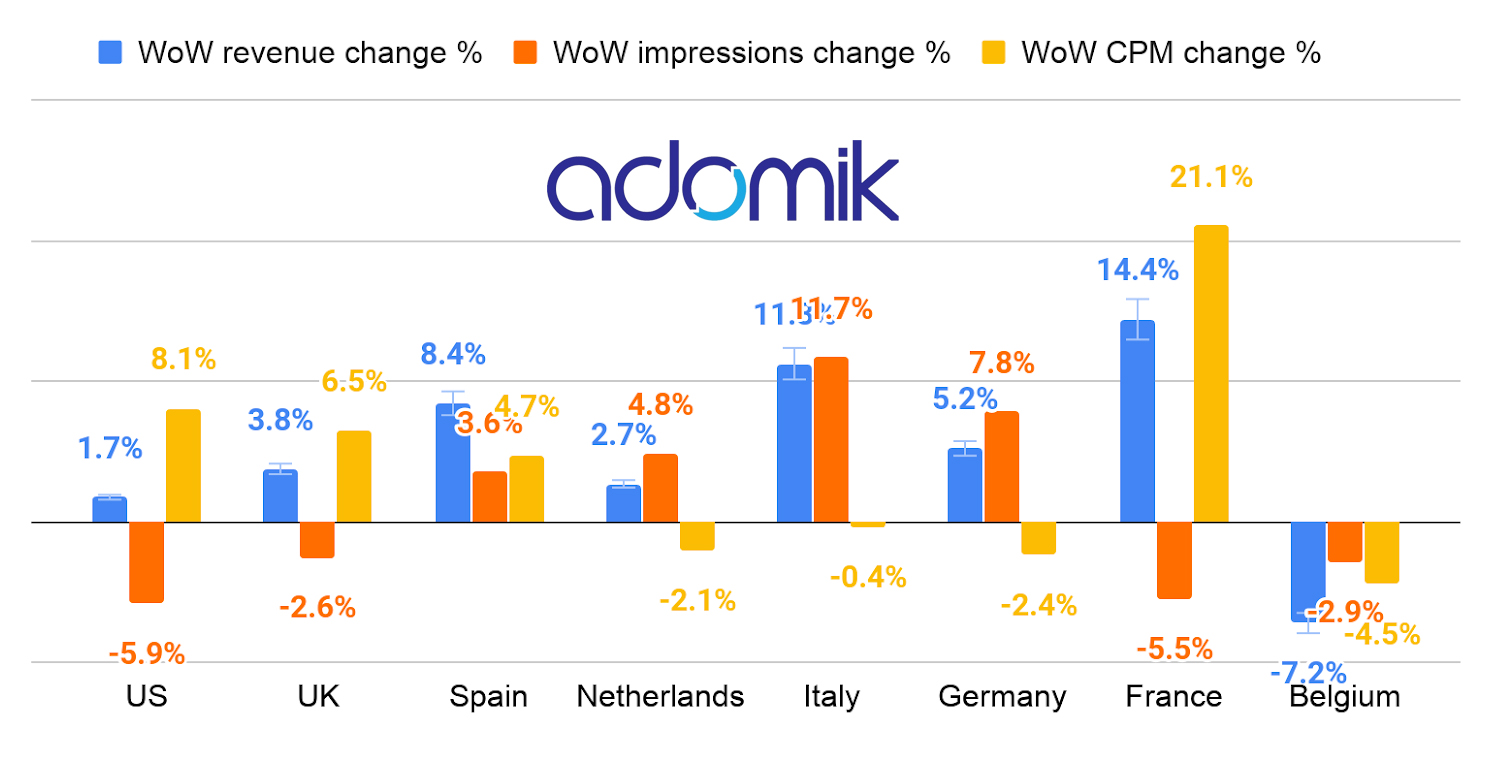 Adomik provides the most relevant market trends we are seeing in the programmatic market via our Benchmark Market index.

Additionally, you can get in touch at insights@adomik.com for more insights or explanation.

Adomik full analysis of the evolution of the programmatic market is now available for 8 countries. The study covers the periods of March 16-April 30 Vs March 1-15 2020 for the UK, US, French, Dutch, Belgian, German, Italian and Spanish markets, with comparisons for programmatic Revenue, Sold impressions and CPM, top Brands and %age change per country.  So get your copy now: 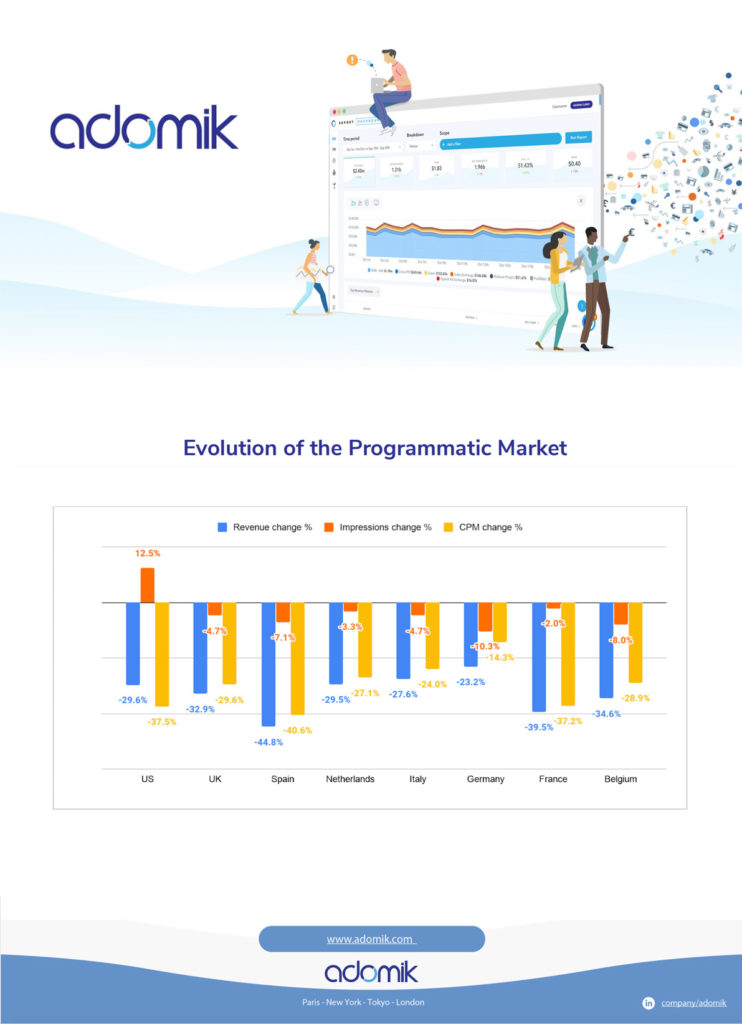 You will find below weekly comparisons for Programmatic Revenue, Sold Impressions and CPM, by transaction type, device, content category, media type as well as trends for a selection of advertisers. 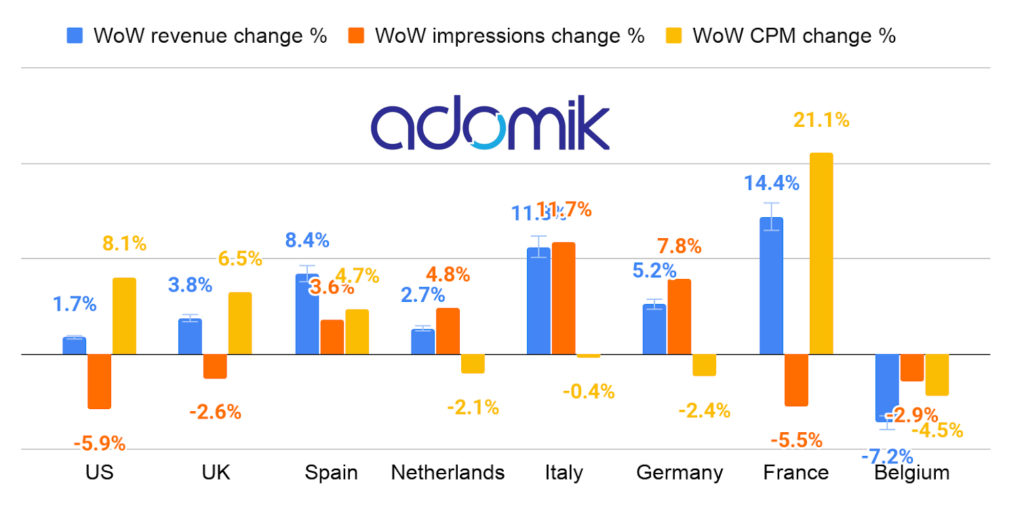 Download full details per country and per period below:
💡Adomik Weekly evolution of the Programmatic Market – periods of April 20-26 and April 13-19 2020: 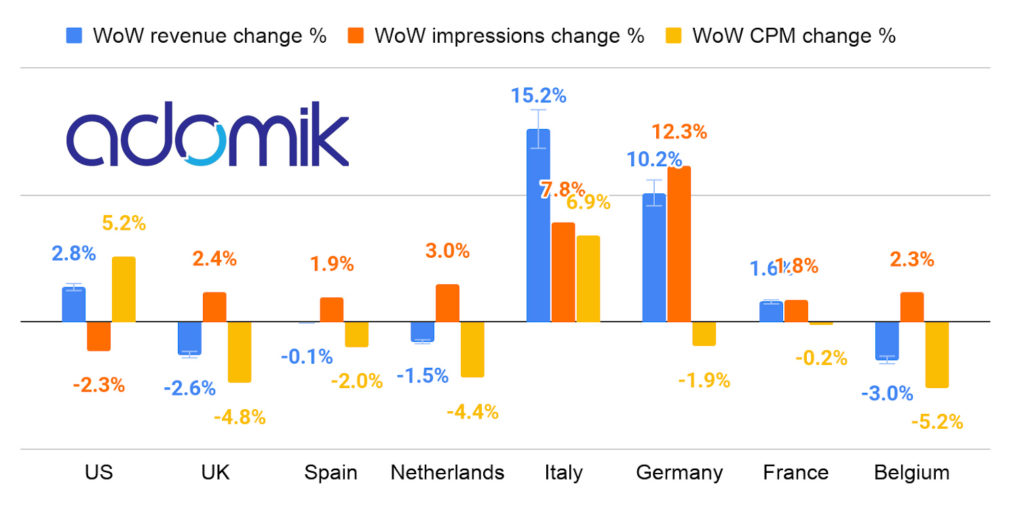 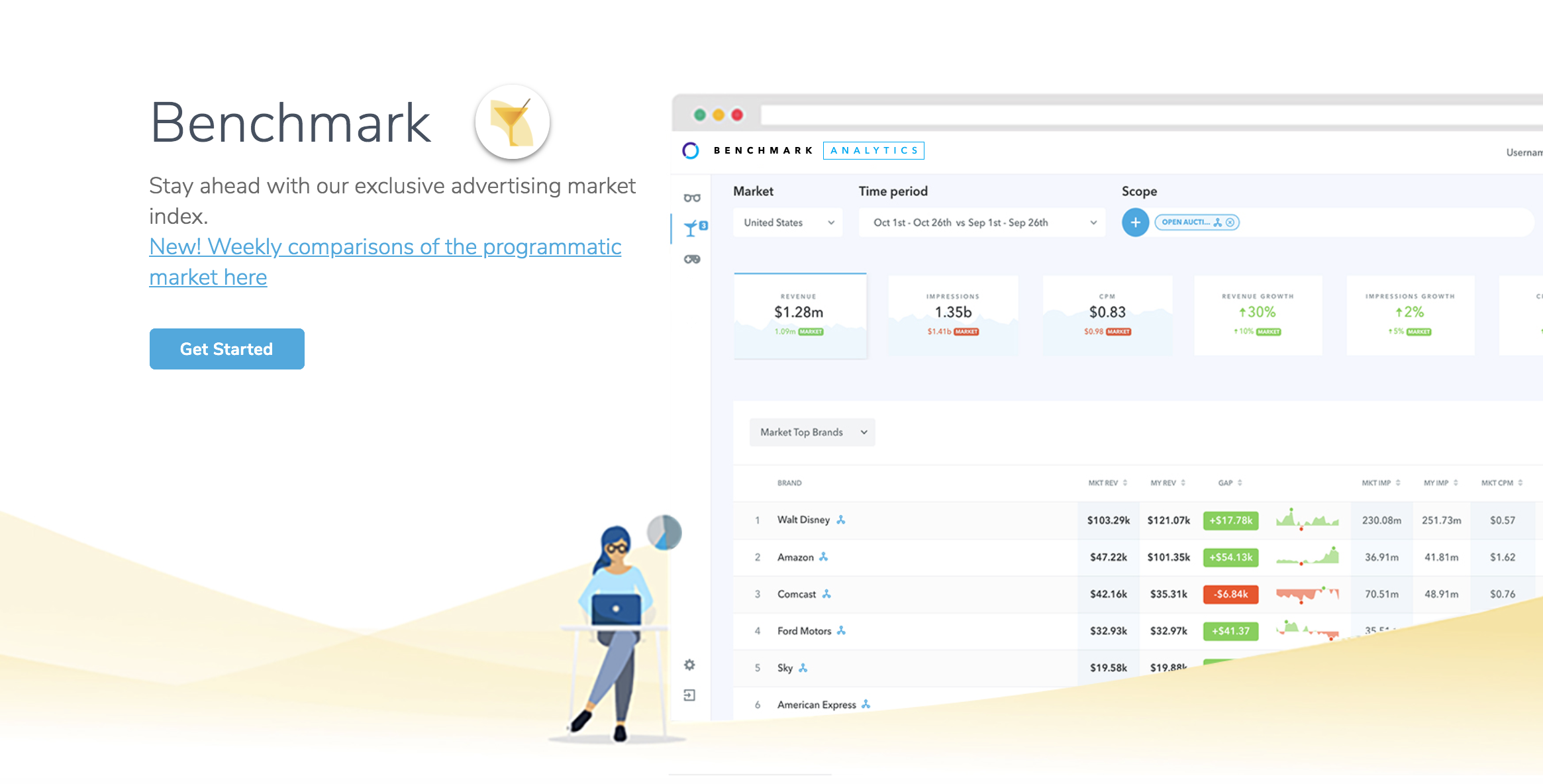 We Are Very Excited to Announce the Launch of Benchmark!

Benchmark is our revamped exclusive advertising market index and benchmarking tool, available in the US, UK, Japan, France, Germany, Italy, Netherlands, Belgium, Australia and Spain. It includes a new UI and some new features such as Market Overview, Analytics and Market Alerts, tailored to your success.

It is ideal to:

Get Started With Benchmark!

With Benchmark, when you log into the Adomik Platform,

Below is an extract from the Benchmark market data in the USA:

The drop in revenue from March to April comes as no surprise and is in line with historical data. The drop is more pronounced for the PMP market, with major brands such as Target, AT&T, Hyundai and State Farm reducing significantly their spend.

The top brands are pretty stable month-on-month, with Target as a new entry and Hyundai exiting the top 5.

**Data extracted from Adomik Benchmark for the period between March 1st to 31st and April 1st to 30th 2019.

You can subscribe to a monthly newsletter called “Benchmark Newsletter” to receive programmatic market data and a short analysis for your country. It is available in the USA, UK, France, the Netherlands, Belgium, Australia and Spain. If you are interested in staying up to-date with the programmatic market, feel free to subscribe.

We’re happy to announce the launch of CTR and Viewability metrics in Benchmark!

As a reminder, Benchmark is our revamped exclusive advertising market index and benchmarking tool. Benchmark programmatic data is aggregated daily across all our customers for multiple SSPs.

CTR and Viewability metrics together will allow you to:

If you need more information, please download the product sheet! 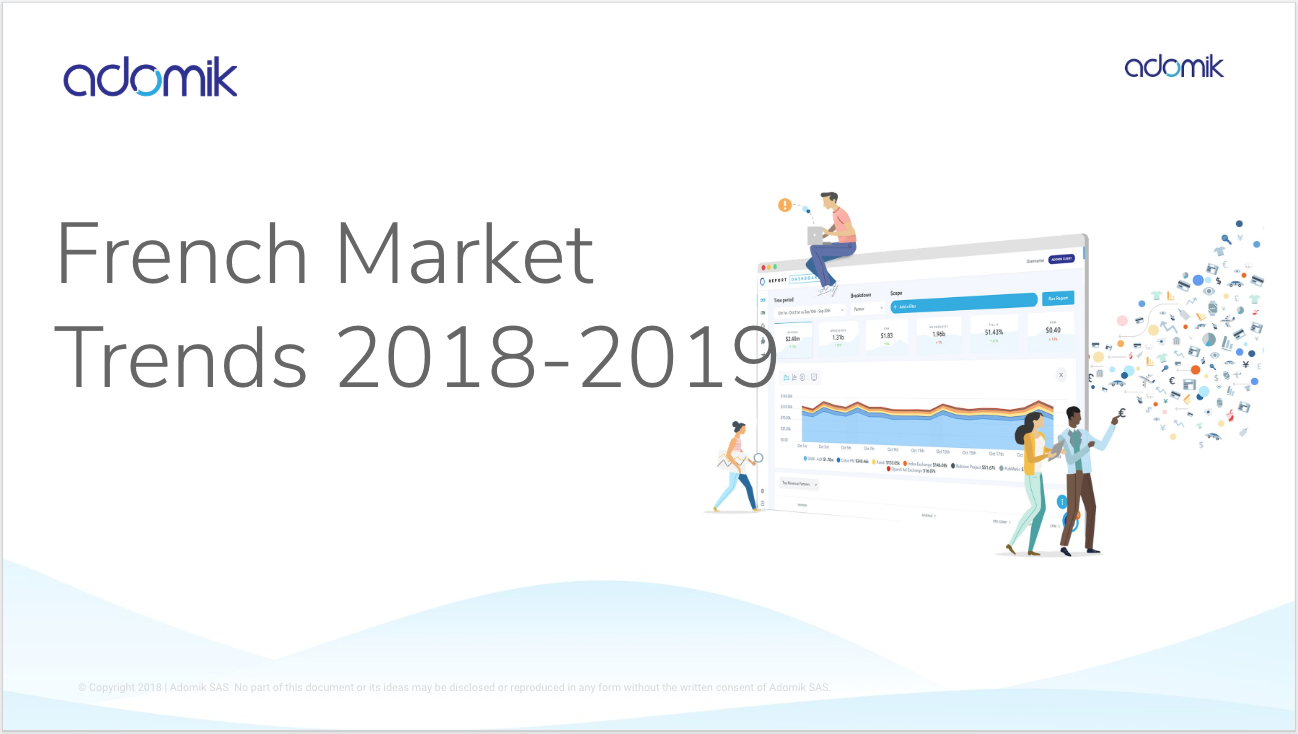 Adomik reveals today exclusive insights into what the French programmatic market looked like 2018 vs 2019. All these market insights come from SELL, our exclusive programmatic market index that gives full visibility into demand, transaction types, formats, CPMs, etc.. In SELL, programmatic data is anonymized & aggregated daily across all our customers in France for the top SSPs. 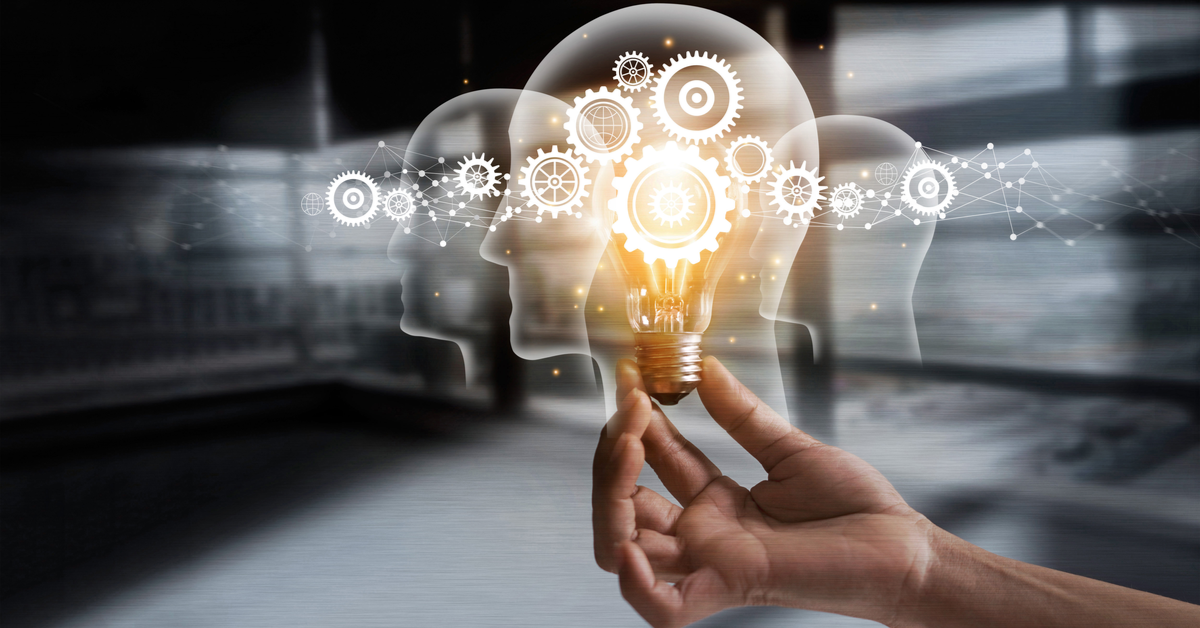 The Adomik platform has been designed to be used by multiple users within or outside your organisation. To enrich our platform flexibility, we’re happy to announce the launch of Custom Profile in the Adomik Platform!

Profile creation will allow you to customize the Adomik Platform experience so that your team and your partners can see data only related to their use case and access only the information you want to share with them.

In a nutshell, our platform can now fit all types of organization and relations with all advertising ecosystem partners.

What type of profiles?

This is a limited list of custom profiles. you’ll be able to create and customize profiles / access according to your needs.

Get in contact with a member of our team to schedule a demo and answer your questions by clicking below: 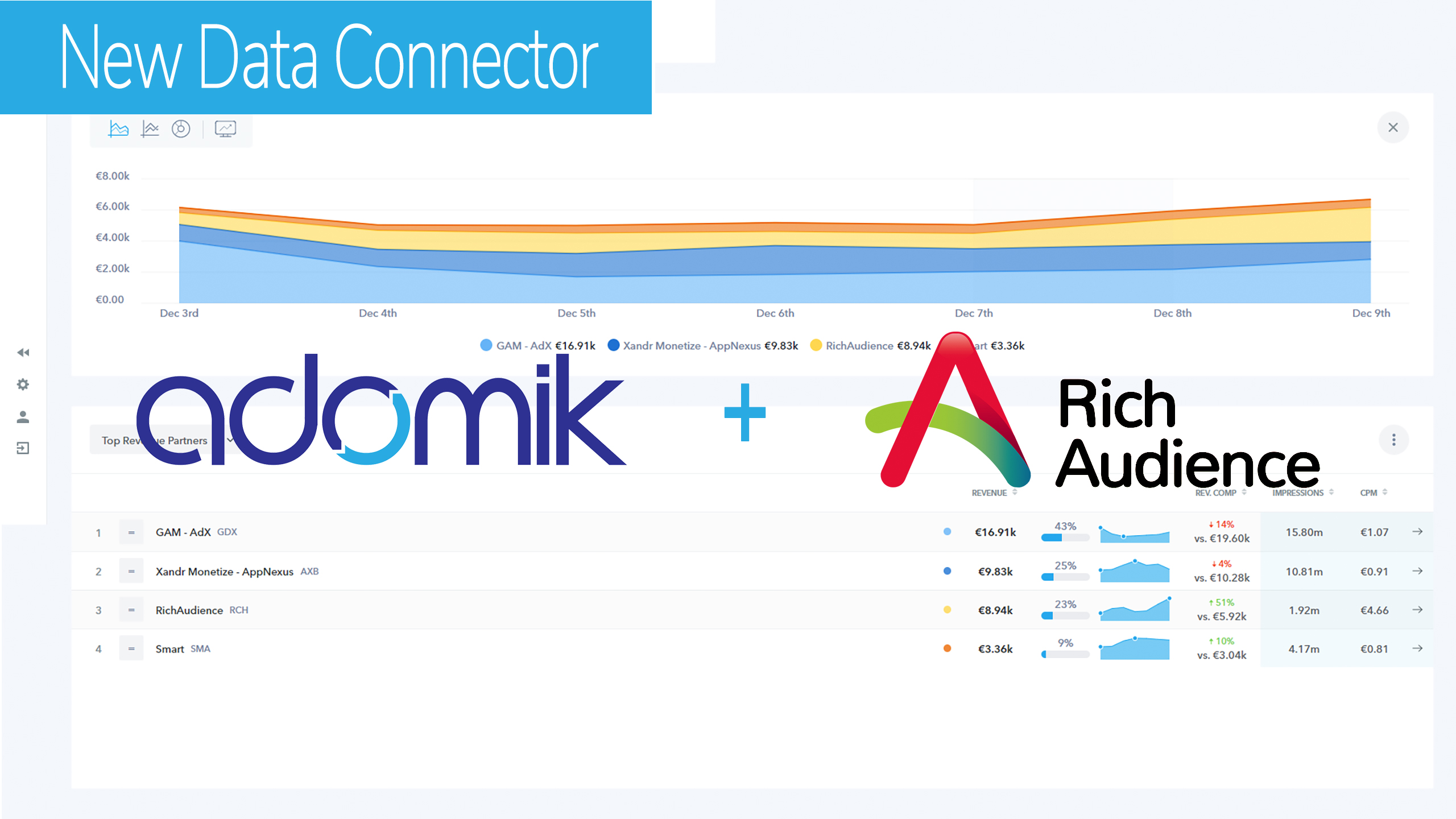 What is the Data Connector “Rich Audience” for?

They have demonstrated to be a solid platform that combines their own demand + other demand sources on s2s model, plus the possibility of managing though prebid display, high impact and video formats. They also unlock revenues in other markets such as in Portugal, the UK, US Hispanics, and Latin America. 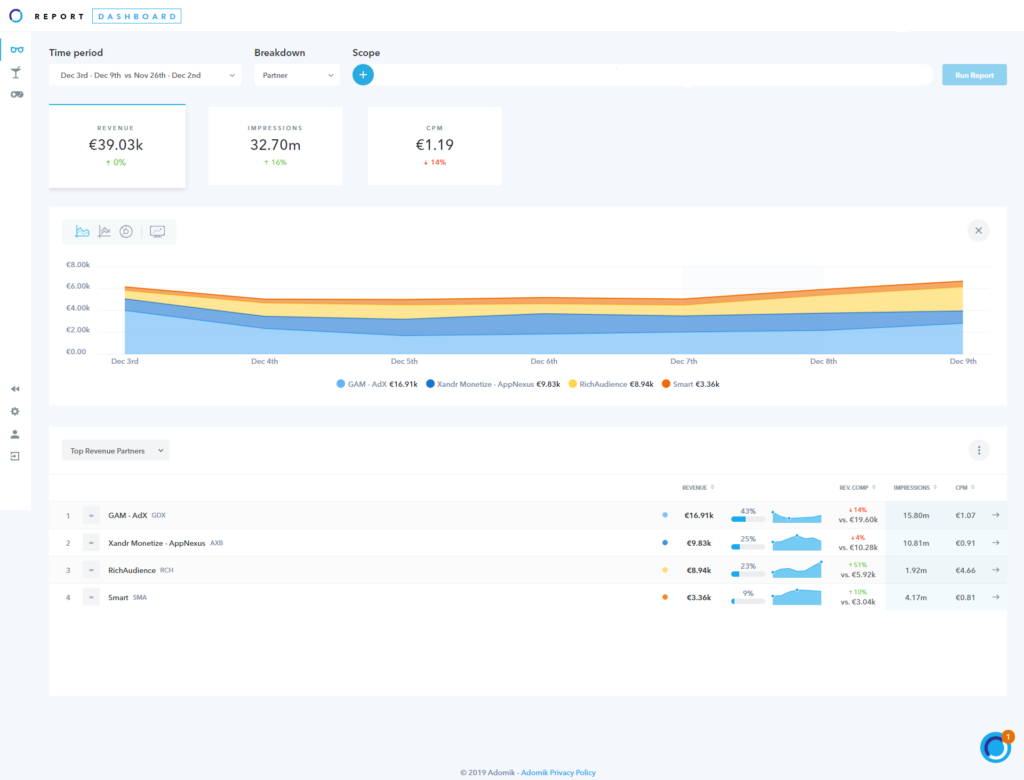 Alongside Google and AppNexus, Rich Audience is a main source of Display inventory for Spanish publishers. 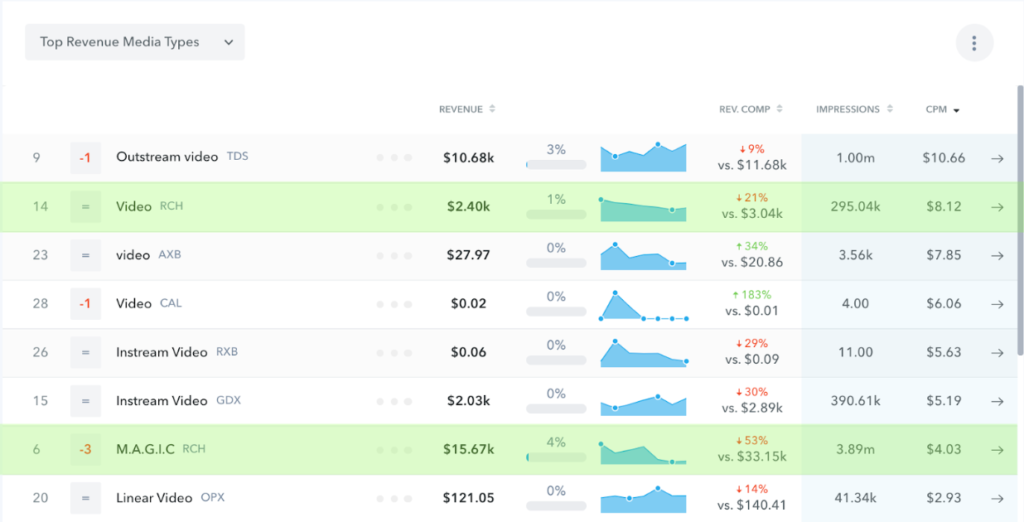 High CPM on Video and M.A.G.I.C – RichAudience’s out of page format.

The Data Engine, the heart of the Adomik Platform. It has been designed for complex Ad stacks, to automatically collect, process, store and unify your monetization data from multiple sources. The Data Engine connects to your monetization partners via dedicated Data Connectors which use a specialized setup, put into place by Adomik, to collect data via APIs, query tools and FTP integrations. Data Connectors are constantly monitored by Adomik R&D teams.

Interested in seeing how the Adomik Data Engine connects to your monetization partners? Request a demo with our Team!

Or take a look at a selection of our data connectors here. 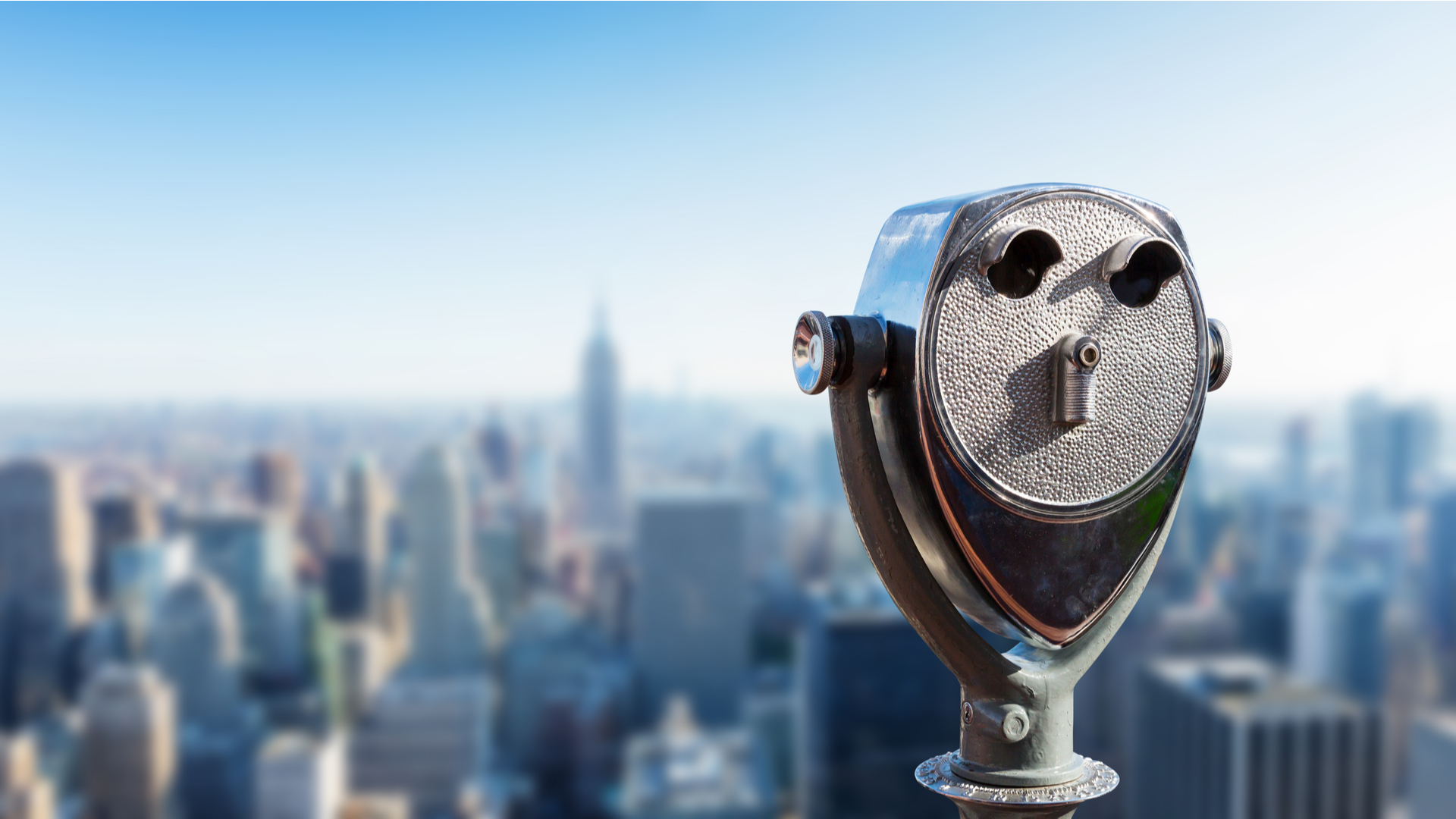 2 months after the Google migration to 1st Price: Read about Adomik observations.

The migration to 1st price is now well behind us, so it is time to conduct an assessment on a longer time span than in our previous blog articles dated October 10th and September 23rd.

Please note two significant events in the recent past, they can explain important changes in the market:

We focussed on “structural” changes rather than on the evolution of specific Publishers. Still, with UPR, some Publishers have significantly changed their pricing setup and how Header Bidding or Open Bidding (the former Exchange Bidding or EBDA) competes with Authorized Buyers (GAM’s programmatic activity, former Google AdX). 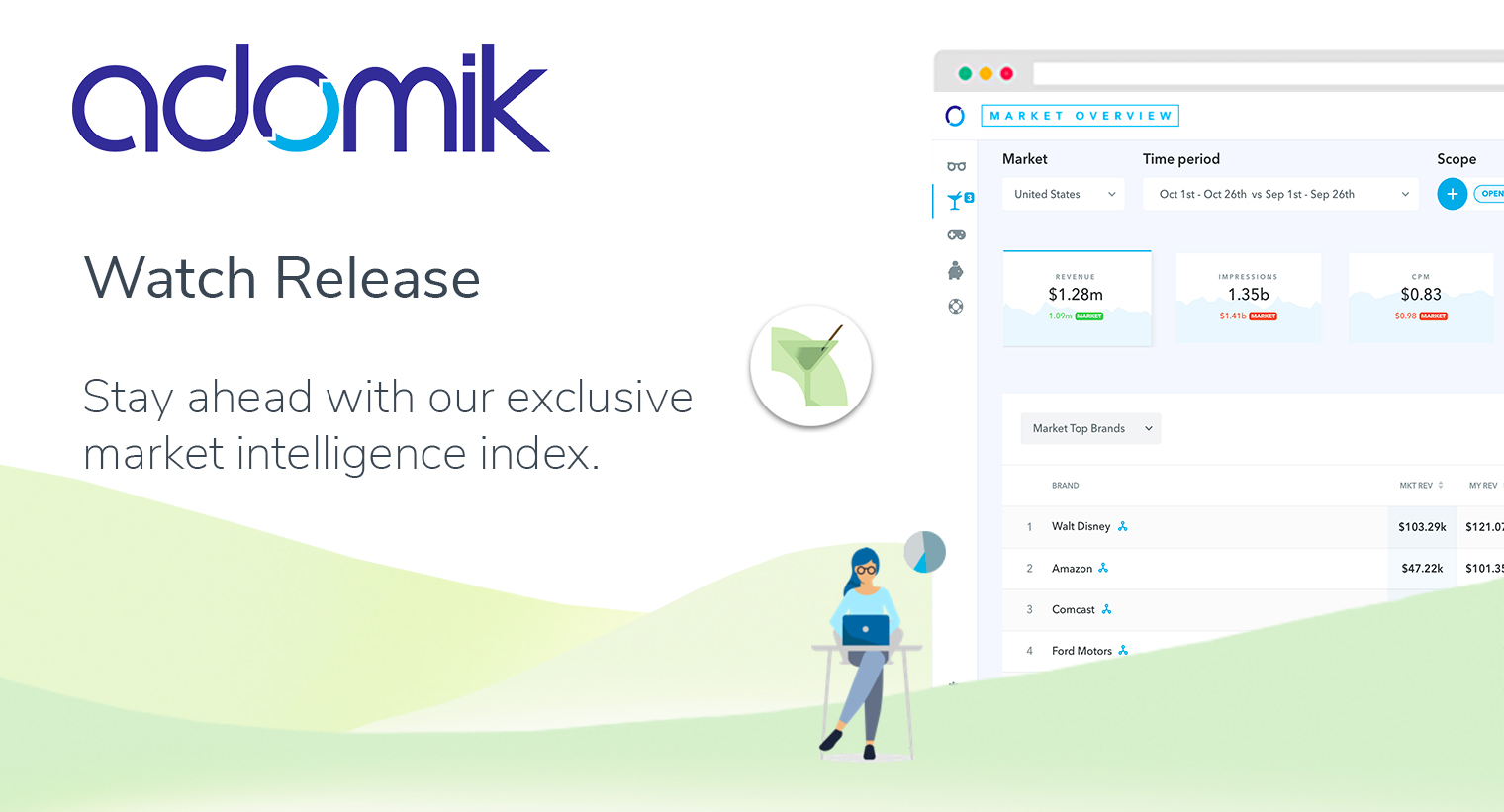 Programmatic market intelligence, pricing & optimization for all programmatic players across the value chain

The Adomik platform was originally created as a tool for Publishers to monitor and optimize their programmatic revenue. Over time, Adomik has built the most comprehensive “programmatic advertising” data set on the market.

The Adomik vision is to fuel trading across the marketplace and to develop a terminal dedicated to programmatic advertising, available to all professionals of the value chain.

How to leverage market data?

So a question arose: “How to leverage this data and ease the flow of budgets from the buy-side to the sell-side”?

Today, Adomik is exploring relationships with SSPs, DSPs and Agencies/Buyers in this spirit. We are discussing sharing “programmatic market data” with all players as well as collecting and aggregating additional data in order to:

WATCH is Broken down by Brand, Buyer, Bidder, SSP.

It is ideal to Monitor  ALL demand on the programmatic marketplace.
It gives access to Live data, detailed on budget shares of voice, spends allocation between brands & buyers, CPM, sales channels, supply routes, etc.

Easy to use user interface with 3 months data history available in tables, with filters on top brands, top buyers and transaction types. 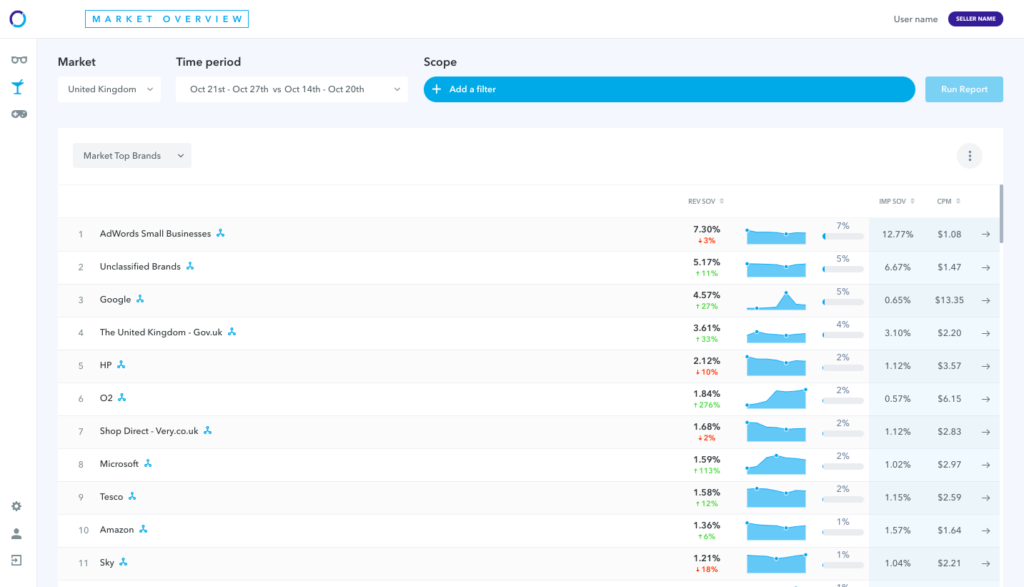 Adomik WATCH is available in the United States, the United Kingdom, the Netherlands, Belgium, France, Spain, Italy, Germany, and Japan

For more information on WATCH, or on forthcoming Watch products, please contact us. 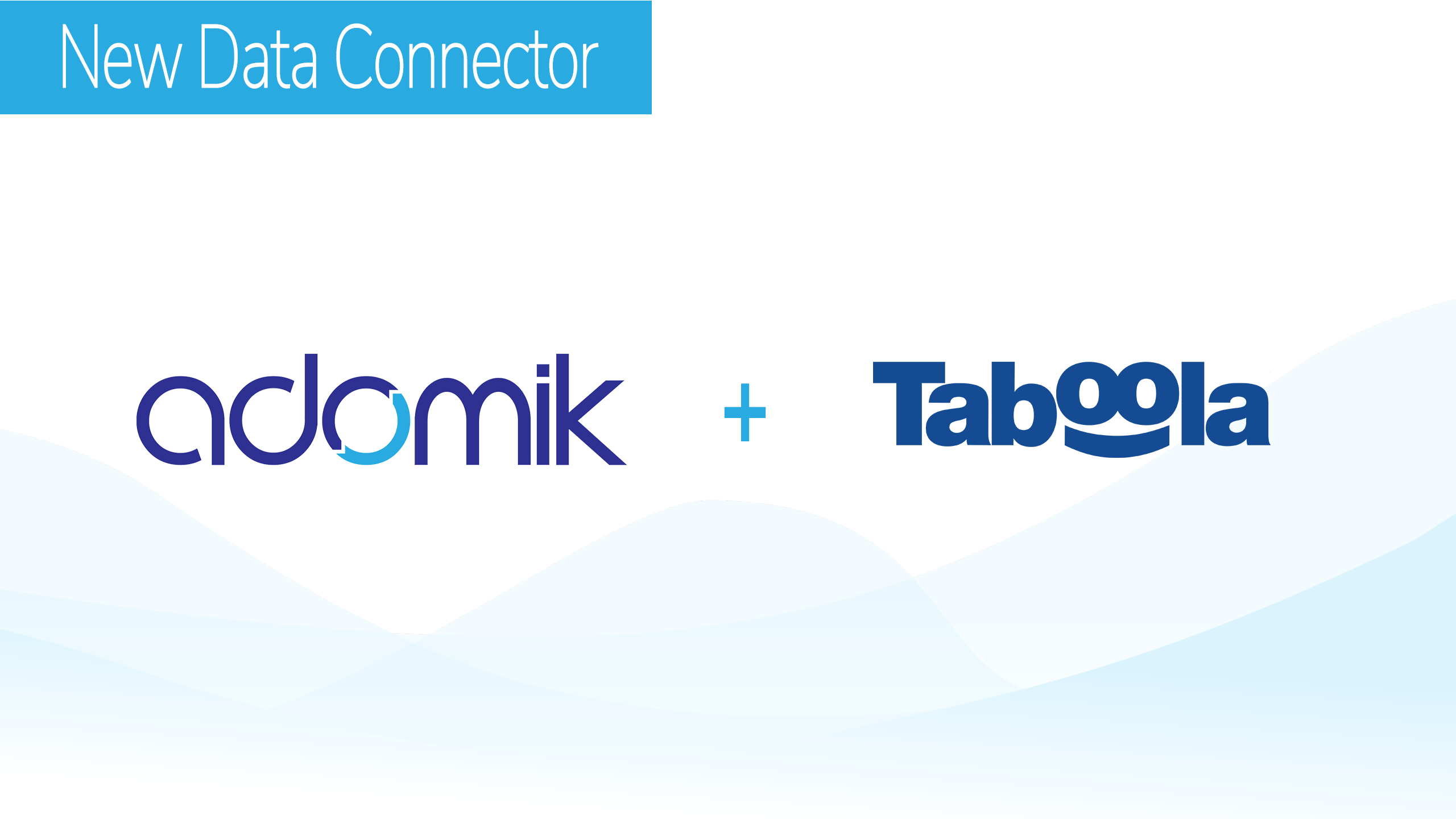 We are delighted to announce that Adomik is now integrated with Taboola!

Taboola has become the largest discovery platform, who provides publishers with innovative solutions, from sponsored video experiences and infinite scrolling newsfeed, to an audience exchange that drives quality traffic.

This integration, along with our existing data connectors including Outbrain, Triplelift, AdYouLike, Pubnative etc., enables you to get a consolidated and mapped view of your business and sales activity within Native advertising, and across all media types (display, video, mobile, native).

What is the Data Connector “Taboola” for?

Taboola is one of the main platforms used when it comes to Native advertising.  Having Taboola means that the content blends seamlessly with its environment: It engages users, keeps them coming back, and maximizes time on site and user satisfaction.

You can attract a large audience on Native advertising: Taboola is the main content discovery platform with 1.4 billion unique visitors each month. It makes it a must-have on our stack when you want to deal with Native advertising. 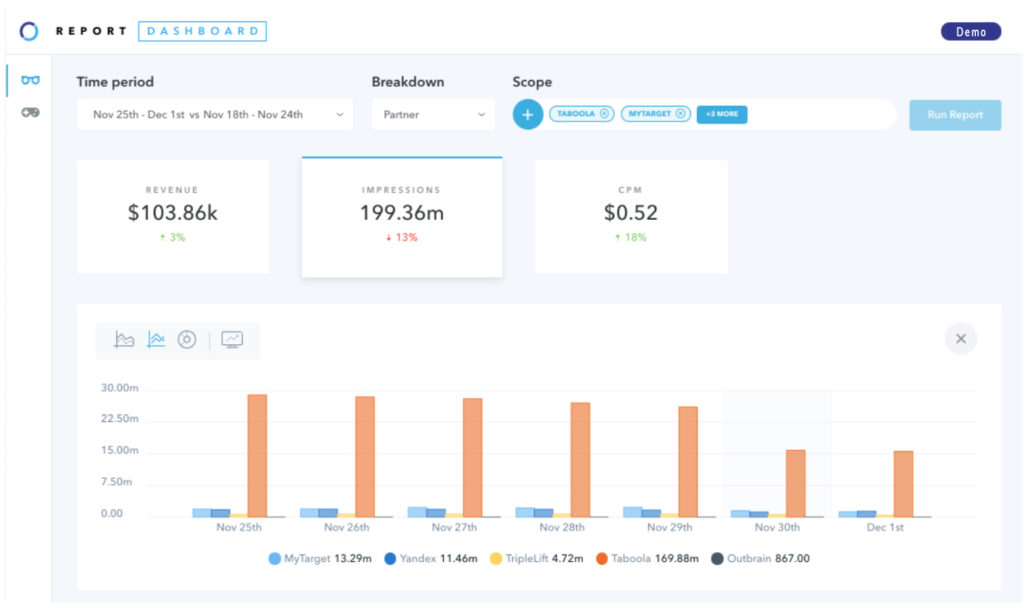 The Data Engine, the heart of the Adomik Platform. It has been designed for complex Ad stacks, to automatically collect, process, store and unify your monetization data from multiple sources. The Data Engine connects to your monetization partners via dedicated Data Connectors which use a specialized setup, put into place by Adomik, to collect data via APIs, query tools and FTP integrations. Data Connectors are constantly monitored by Adomik R&D teams.

Interested in seeing how the Adomik Data Engine connects to your monetization partners?

Request a demo with our Team! Or take a look at a selection of our data connectors here.