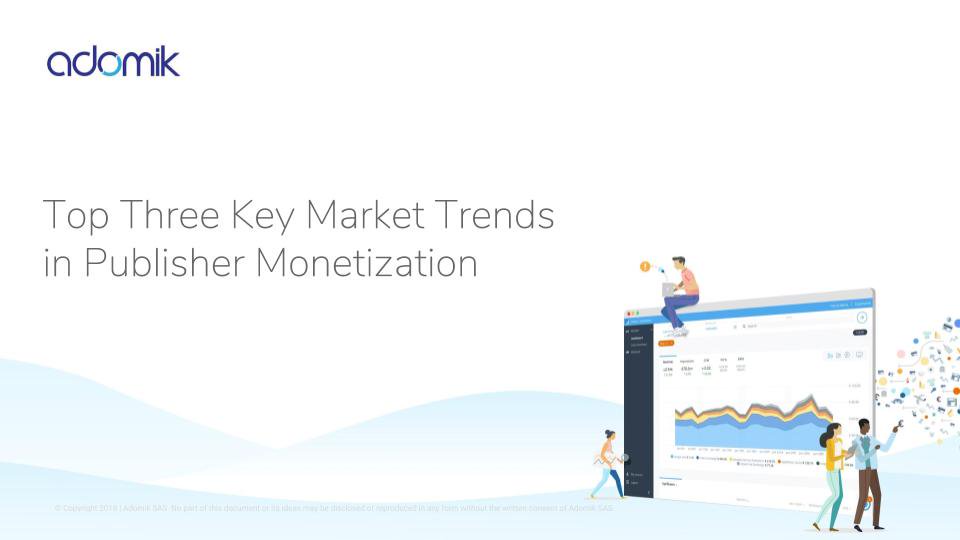 The advertising industry has changed significantly in the past few years, and the market will continue to evolve in the future. So publishers need to be conscious of the main trends that will impact their publisher advertising business and adopt the right tools to support their monetization effort.

Adomik’s SVP of Global Revenue, Benjamin Lanfry, had the pleasure of presenting three key market trends on October 3rd, 2018 at DIG in Lisbon:

Wait… But how can Adomik detect these key market trends?

Adomik works with more than an hundred of large publishers in more than 20 countries. Our platform connects to publishers’ data connectors which allows to get exclusive visibility on demand activity and how programmatic sales are evolving. Therefore, thanks to our platform we are able to share insights and key figures about various market trends.

According to IAB Europe research, in-house is now the favored advertising model with nearly 40% of advertisers executing their programmatic trading via in-house operations. We wanted to share more figures and specific names about the brands that have been most active since the beginning of the year.

So we analyzed the major European markets and discovered that on average, among the top 50 buyers in the different EU markets we looked at, almost 20% are actually advertisers. That’s a 50% increase Year-on-Year so it is quite remarkable. Moreover, their average CPM are in average 20% higher than the rest of the buyers.

However, it is worth saying that sometimes a brand might have its own DSP seat that might be operated by a trading desk.

Here are some brands in housing in top 50 buyers from different countries:

So publishers are driven by the ability to increase the value of the inventory and achieve higher budgets through better data usage.

Moreover, this phenomenon of in-housing, as well as the growing numbers of demand partners, monetization platforms, advertising products, have led to extreme data fragmentation, making basic reporting and the decision-making process more complex.

Nevertheless, we believe this is a real opportunity for publishers to get back in the game.

Thanks to our Platform, we’ve seen that the average publisher CPM has increased significantly over the last 12 months by 37% (CPM growth 2017 vs 2018).

What should publishers do to take advantage of this trend? We identified 4 different drivers behind this:

Get involved in the fight for transparency

All market players must commit to the fight for transparency.

To date, the majority of publishers have implemented ads.txt in order to avoid domain spoofing which resulted in a real lift in perceived value from the demand side.

Moreover, we believe that you should start to investigate on how to leverage the open RTB 3.0 protocol in your organization which is going be a game changer when it will start to be implemented.

Unauthorized sale and more generally, the lack of transparency is one of the most important problems in programmatic advertising, so publishers have to get involved in this fight transparency.

Channels such as PMPs, programmatic guaranteed, first party data sales can be very valuable if used properly. Publishers should leverage this rise in high-value programmatic products as a key part of their programmatic strategy.

Programmatic Guaranteed have been a real PMP killer in the market. What is really a game changer here is that this has been designed to fit the needs of the buy side, especially automation, scale and guaranteed delivery.

However we have seen massive investments on this sales channel so far this year, especially on video, so if you haven’t yet, consider investing in Programmatic Guaranteed.

Server-side is not enough

Another trend concerns header bidding and the best mix to adopt between client-side and server-side integrations. We know that the future is server-side especially in-app, but looking at the numbers we are not there yet.

Right now, the adoption of server-side setup is not sufficient, especially because it often leads to a lack of transparency, lack of data segmentation and a lower cookie matching rate.

Client-side is still a must at least until ID5 has cracked the cookie sync issue. Even when best-in-class publishers have Amazon TAM or EB, they have really been able to make the most of a client-side integration and especially have the right demand partners connected.

Regardless of the header bidding setup, publishers have to be flexible and have an organization that listens to changes in the market.

The last driver is more about the organization between different monetization teams.
We have seen a new trend in which publishers are hiring analysts and yield managers to make more informed decisions since a couple of years ago.

This is going in the right direction but not far enough. The best-in-class publishers that we see have almost always created a position in the team who is in charge of assuring holistic revenue maximization regardless of the sales channel or platform, etc. This means that this person should have the power to say yes or no to whatever change that might impact the revenue.

No one is talking about it anymore but the only reason is because everyone is behaving like it did not happen.

In our GDPR white paper we analyzed the impact of the GDPR on two major European markets: France and the Netherlands.

In a nutshell, you can see from our numbers a pretty steep decrease in average revenue for a couple of days in French and Dutch markets on the 26th compared to May 23rd & 24th. However, over the following weeks things have almost gone back to normal as if the GDPR hadn’t happened.

Let’s see what happened in detail in these 2 countries:

Netherlands: The Netherlands was hit a bit harder than the French and other markets, they had an overall drop in ad spend of 29%. The Dutch market has proven to be slightly more resilient in the medium-term compared to the French market with an overall market increase of 20%.

Generally speaking, what happened in the medium-term is pretty much in line with how we would expect the market to evolve in June based on regular seasonal changes.

However, what everyone should not forget is that at this stage everyone is bypassing the consent signal. When the first 20M fine happens, the big players will be playing by the rules, and this might have a huge impact on the way the cookieless users are evaluated.

If you are interested in knowing more about these trends or our platform: